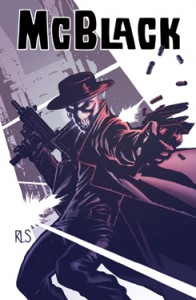 Whiteface McBlack used to be a private detective, but he gave it up to concentrate on the stuff he really enjoys: murder, arson, sabotage and maimings. He reluctantly agrees to help the Killer Dame find her no-good husband, but soon he’s up to his eyesockets in paramilitary cannibals, mutant cyborg bikers, redneck triads, and a heavily armed municipal soccer team. As the body count rises McBlack’s attention begins to wane. What will it take to get keep the man in the hat interested long enough to solve the case? 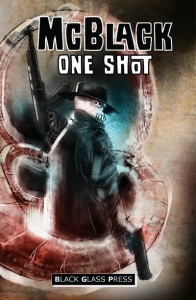 McBlack is dispatched on a multi-level search-and-destroy mission–but who is the target, and who is he really working for? 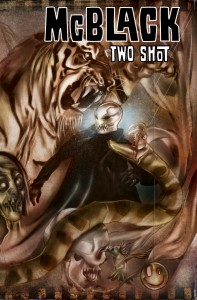 McBlack is hired to eliminate a monster that is haunting a young boy’s dreams. But can he survive the imagination of a child? 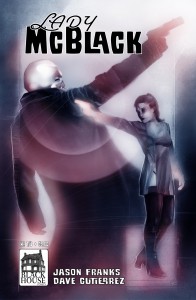 At the behest of her three sisters, McBlack investigates the murder of Lila Bodicker by the Western Reapers, a mixed municipal soccer team. But whoever killed Lila does not want the Bodicker sisters to find out what really happened and before long McBlack himself is being hunted in the streets. Part 1 of 3.

Written and pencilled by Jason Franks. Inks by Dave Gutierrez. Cover by Rhys James. 22 pages in black and white.